So if the 2020 Child Count data had a big surprise, the 2021 Child Count data doesn't seem to have any *big* surprises. We may still be seeing some effects of Covid, in that the year-to-year percentage change in the number of students with autism was lower than what is generally was prior to Covid. (Click on a picture to open it in a new window.)

Here is some more data:

Out of all the students identified under the IDEA, students with autism are about 10% of the total child count.

Here are graphs of the number of students with autism by school year: 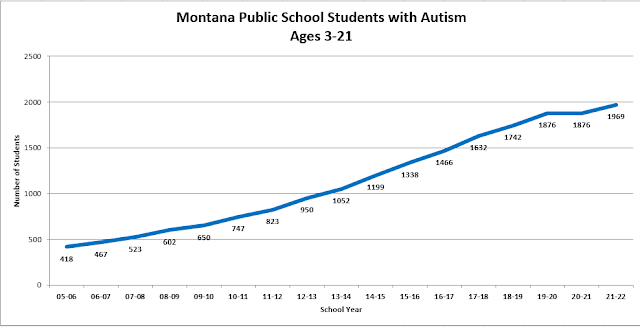 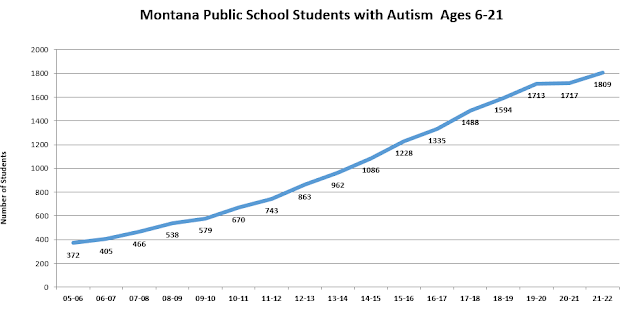 In 2019, the Developmental Delay criteria expanded from students aged 3-5 to students 3-8. So we wondered, did that expansion of the DD criteria to include ages 6-8 have an effect on the number of 6-8 year-old students with autism, who, if they hadn't met the autism criteria before age 6, might have continued in or been identified as having a developmental delay rather than autism?

Probably not much?  Although the 6-8 year-old DD numbers increased by 82% in three years, the number of students aged 6-8 with autism showed an increase of 3% in the same three years, as the number of IDEA students aged 6-8 increased by 6%. Keep in mind that the age 6-8 autism numbers are fairly small so that a 1% increase or decrease would be only 4 kids.

Data Nerd sidebar - We now have 898 students aged 6-8 with developmental delay. So I am wondering - are these 900 kids aged 6-8 who had DD as their first identification? Or has there been a corresponding decrease in SLI, CD or other categories if those 6-8 year-olds continued as DD instead of being moved to another category or exiting special education? (I will be looking at that data.)

If you look at the second table, third line in this post and remove the 2020-2021 covid year, the increase in the number of special ed students isn't unlike previous years. So where did the 6-8 year-old DD kids come from?

The age distribution of students with autism remains essentially the same as in previous years. 2020 2018  2017 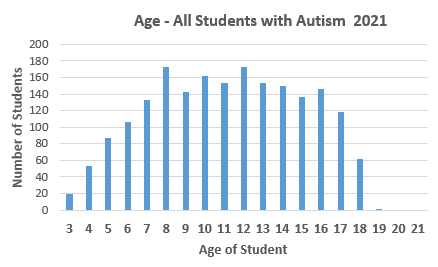 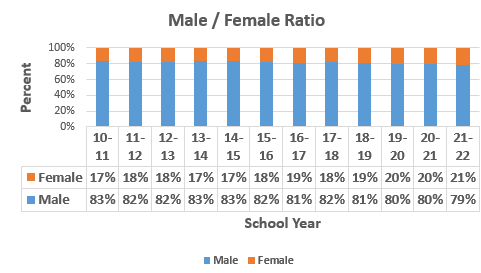 Autism distribution by race remains fairly constant. (We will share additional American Indian data in the future - scroll down here for past data.) 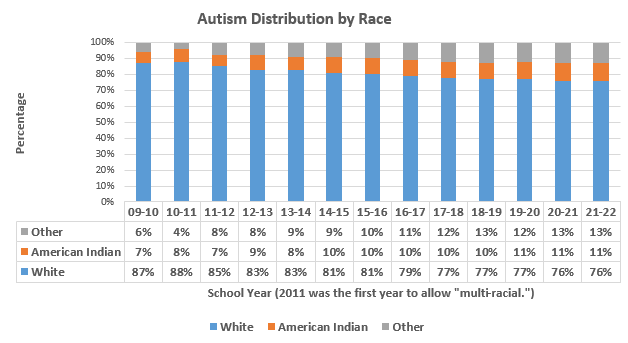