When we went to renew our contract with the provider, they insisted on contract terms which are not allowable under Montana law. Thus, we can no longer offer the training.
If you want to be informed of future training opportunities from the OPI Montana Autism Education Project, you can subscribe to our mailing list here.

Posted by Anonymous at 4:22 AM

Benefits of a Positive Behavior Support Plan for Autism

So what would be the ideal way to address problem behavior? When it comes to our children we just want difficult behavior to stop as quickly and effortlessly as possible. Whatever it takes…rewards or even punishment are frequent weapons in the parental arsenal against challenging behaviors.

But if the problem behavior has a function, or if the behavior is a way to express an unmet need, rewarding or punishing the behavior may not be the answer. Applied behavior analysis (ABA) teaches us that behavior occurs as individuals get something out of it; ABA specifically targets the four functions of behavior which are:

Understanding the function behind an autistic child’s difficult behavior often leads parents to behavioral research which suggests formulating a comprehensive plan to address the behavior appropriately with evidence-based principles and interventions.

A study in the Journal of the American Academy of Child and Adolescent Psychiatry (JAACAP), published by Elsevier, reports that the type of one-on-one treatment plans delivered to toddlers, aged 12-30 months, diagnosed with autism spectrum disorder (ASD) did not lead to any significantly different outcomes. Neither the type of evidence-based intervention provided, nor the number of hours of therapy were shown to have an impact.

The treatments, or intervention methods, delivered by specialized staff to the very young, during the study were either the Early Intensive Behavioral Intervention (EIBI) or Early Start Denver Model (ESDM). The researchers found negligible overall effects on receptive or expressive language development, nonverbal abilities, or autism symptom severity after one year of direct intervention, which also included twice-monthly parental coaching.

"Our results should reassure parents who do not have access to the exact treatment type or the number of treatment hours that they would ideally like their recently diagnosed toddlers to receive," said Sally Rogers, PhD, lead author of the study and Professor Emeritus at the UC Davis Department of Psychiatry and Behavioral Sciences, and the MIND Institute. "Given the lack of differences across these four groups, it may well be that it's the common elements rather than the differences that are resulting in children's similar progress."

Background: Children with autism spectrum disorder (ASD) share some symptoms with children with other neurodevelopmental disorders (ie, intellectual disability or communication disorders or language disorders). These similarities can make difficult to obtain an accurate diagnosis, which is essential to give targeted treatments to the patients. We aim to verify in our study if children with autistic traits who undergo to Autism Diagnostic Observation Schedule had specific clinical diagnosis.

Patients and Methods: We selected 73 children tested with ADOS-G or ADOS-2, for the presence of autistic symptoms. The whole sample did not reach the cut-off of ADOS and did not receive the ASD diagnosis, according to DSM-5.

Results: Results of this study showed that in order of frequency and early diagnosis, communication disorders (CD), mild intellectual disability (mID) and the attention deficit hyperactivity disorders (ADHD) represent the most common final clinical diagnosis in children with autistic traits.

Conclusion: Our results showed as the CD was the common diagnosis of these children and that often associated with younger age. Moreover, analyses of ADOS domains and the difference of individual items between groups did not show the capacity to differentiate between different neurodevelopmental disorders in terms of differential diagnosis, and this confirms the need for integrating multiple sources of information during the diagnostic process.

We conducted a survey of educators who had previously attended PECS Level 1 and 2 trainings sponsored by the OPI Montana Autism Education Project. The survey was conducted after they had been using PECS for three months to two+ years.

Here are some of the results: 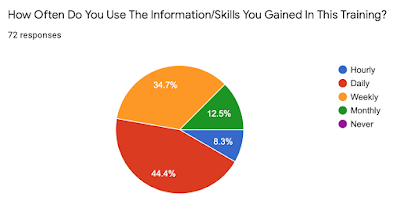 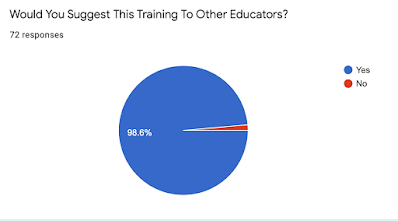 (Doug - I think the *only* person who said, "No" might have had a slip of the mouse, since they also said they use PECS daily and PECS help them to better educate students.)

PECS has been extremely useful for students with limited communication.

This training has been of great help to me. Something that was applicable the day I returned to work.

I think all of our Special Ed staff should attend this training! We have multiple kids that use PECS and I think everyone that works with them throughout the day should know how to work with them in an effective way.

Last year I had a three year old with autism who started the year with almost no ability to communicate other than to run and scream and flail. We introduced PECS and that beautiful little girl not only learned how to use PECS to communicate in sentences, she began speaking in sentences within a few months. Her progress was so rapid , and generalized throughout her day at school as well as home and within the community. I moved her from a self contained STAR class to my highest functioning class for kids with much less significant delays and she was the social and communication role model. All within a few months. I truly believe PECS changed the trajectory of her life!

Break Cards for Students Learning the Zones of Regulation 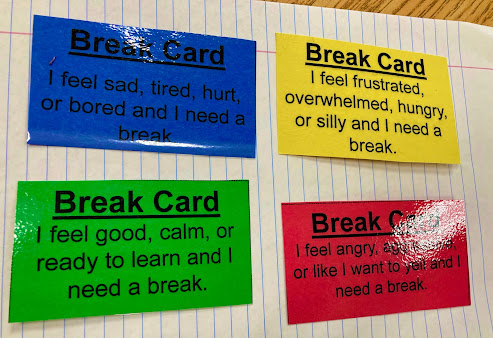 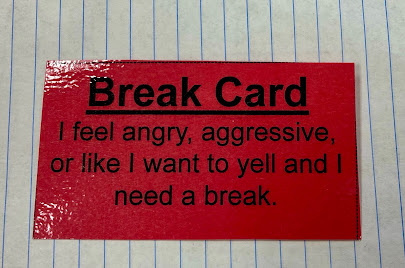 Teaching How To Ask For A Break

10:00-12.00 Pacific / 1:00-3:00pm Eastern
Robing Steinberg-Epstein, MD, UCI, will present 30 minutes on the neurological/sensory processing experience, underpinning of challenging and dangerous behavior in autism (30 minutes)John Guericio, PhD will talk on his assessment tool for managing adults with severe behavioral challenges (30 minutes)Erik Jacobson, PhD will talk on the cultural approach he and his team have embraced with the emphasis on their clients with severe and challenging behaviors by being happy, relaxed and engaged (30 minutes)
Register here.
Posted by ddoty@mt.gov at 11:35 AM

IRCA staff are thrilled to announce our Inaugural IRCA Autism Conference: Learning Together. This year, the conference will be held virtually on September 29, 2021. Speakers will address a range of topics relevant for those across the autism spectrum and across the age span.

A short film in which nonspeaking autistic people talk about how nonspeakers are represented in books, theatre, and film. They provide guidance for changing the narrative. Learn more and access transcripts, translations, and a toolkit here: https://communicationfirst.org/LISTEN/

You can view the 5 minute film here.