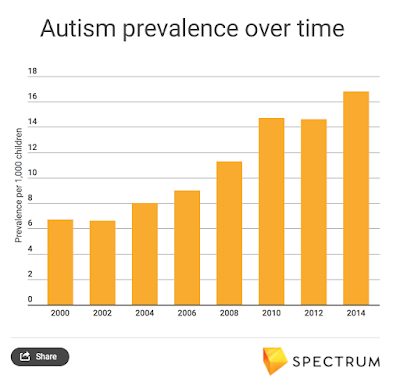 “The current ADDM report seems to indicate that awareness of [autism] characteristics is broadening and this contributes to increases in [autism] prevalence overall,” Rice says.


For example, autism prevalence is consistently higher in white children than in black or Hispanic children — a pattern researchers attribute to disparities in access to medical care. This difference has been trending downward since 2002.
Local factors can have a big impact on prevalence. Sheldrick and his colleagues have found that the disparity in prevalence among U.S. states has steadily increased between 2000 and 20122.
For example, data for two of the states with the highest prevalence — Maryland and Minnesota — come from small sampling areas clustered near a diagnostic center. And New Jersey is well known for providing strong access to medical and special education services. New Jersey also does not show significant disparities in prevalence among ethnic groups, suggesting that as autism identification improves, these disparities disappear.
“People think of [national prevalence] as true prevalence, and I think we need to be careful of that interpretation,” Sheldrick says. “If New Jersey represents the true rate, that’s a lot higher than [the average], and that has real implications.”
Read more here at Spectrum.
Posted by ddoty@mt.gov at 12:55 PM