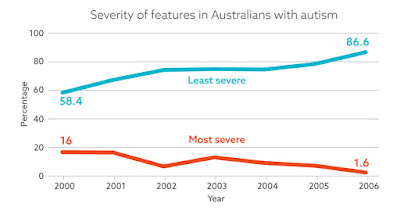 Although the number of people diagnosed with autism is on the rise, the proportion with severe features has declined since 2000, according to a study of children in Western Australia1.
The findings, published 19 January in Autism Research, highlight a shift in the perception of autism. Until the 1990s, clinicians typically diagnosed the condition only when a child had significant intellectual disability or language problems.
“What a child with autism looks like has changed over time,” says lead investigator Andrew Whitehouse, head of autism research at Telethon Kids Institute in Subiaco, Western Australia. “We have greater awareness that autism isn’t just children with intellectual disability who show autistic symptoms; it can be far broader than that.”
Read more here at Spectrum.
Posted by ddoty@mt.gov at 9:30 AM