See the videos here.
Posted by ddoty@mt.gov at 9:19 PM 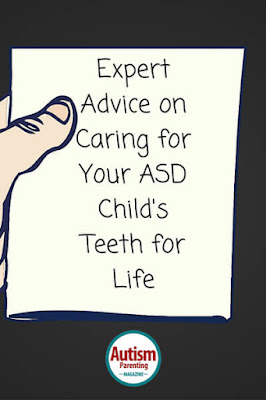 We all know that dental health is important, but it can present extra challenges to children with autism.
Taking care of your children’s teeth is an important aspect of their overall health and can prevent more serious problems from developing later on. Most dentists advise brushing your child’s teeth from the appearance of their first tooth but some children will take longer to adapt to a dental care routine than others. If you are working towards a regular dental care routine, it will probably take a while — and this is fine.
Brushing your autistic child’s teeth
Your child may find the sensation of tooth brushing alien and very unpleasant. If they are struggling in the atmosphere of the bathroom, why not try moving to a more comfortable atmosphere, such as your living room?
Read more here.
Posted by ddoty@mt.gov at 9:11 PM 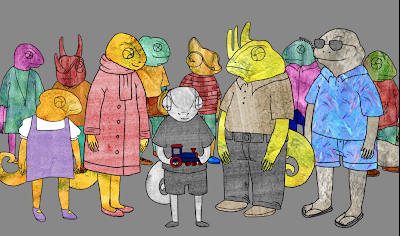 A short video about colors.
Posted by ddoty@mt.gov at 9:04 PM

From Trail Creek Road, Erik’s Ranch looks like many of the western-style mansions in the Paradise Valley. The sprawling main house sits above a terraced lawn and an enclosed walkway stretches to a pool house with exposed log rafters.
But there’s more to the 7,500-square-foot home than white marble staircases and dining sets upholstered with fawn hides. Erik’s Ranch and Retreats is a nonprofit organization providing young adults on the autism spectrum with a place to thrive.
The ranch is named for Erik Nordberg, the son of Kathryn Nordberg, who started the organization after finding the existing options for her autistic child inadequate as he entered adulthood.
“As your child starts to get older you think what’s going to happen when I’m gone,” Kathryn Nordberg said. “Every parent of a child with special needs thinks about that.”
Read more here.
Posted by ddoty@mt.gov at 8:03 PM

”Building Community in the Bitterroot Valley”

Presents:
an “Un-Typical Workshop”
When? November 14, 2016 (Monday morning) 9:00am - noon (FREE brunch)!
Where? St. Francis Catholic Church Reception Center, 411 S 5th St, Hamilton, MT 59840
Why? To help parents/caregivers of children with special needs and friends connect & ask questions related to any family, school, medical, or life issues
How? By creating a safe environment of open communication and fostering an open exchange of ideas

”Building Community in the Bitterroot Valley”
Topics include:
- Wellness 101 (advocacy starts with taking care of yourself)
- Q & A with OPI on IEP’s & 504’s
- Parent specific topics (your requests from RSVPs)
Food catered by: Morningstar Caffeine & Cuisine, in Stevi
RSVP required by Monday, November 7 at http://RSVP.PLUK.ORG, or to receive follow-up information if you are not able to join in person.
Contact Jennifer Gaston-Smith, Western MT PLUK Family Support Partner at
(406)255-0540 x707 or JGS@pluk.org

Some children may truly outgrow autism

Children who officially lose their autism diagnosis show no residual signs of the condition, a new study suggests1. The findings support the idea that these children no longer have autism features.
“They really are indistinguishable from their typically developing peers,” says study investigator Inge-Marie Eigsti, associate professor of psychology at the University of Connecticut in Storrs. “They don’t have any [autism] symptoms at all.”
The study, published 18 August in the Journal of Autism and Developmental Disorders, is the latest effort to document the characteristics of children with a so-called ‘optimal outcome.’ These children were diagnosed with autism before age 5 but no longer meet criteria for the condition.
Read more here.
Posted by ddoty@mt.gov at 2:10 PM

The effectiveness of Visual Schedules

Everyday tasks can prove to be a challenge with an autistic child because they need constant reminders.  Transitioning from one task to another can cause anxiety or a meltdown to occur.  However, social stories, visual schedules, and reminder strips can help alleviate the stress and anxiety associated with the everyday tasks that so many of us do with ease.

There are some good ideas and tips in this article.
Posted by ddoty@mt.gov at 2:08 PM

CLAIM: Children who watch at least 30 minutes of “Peppa Pig” per day have a 56 percent higher probability of developing autism.

Talk of a Harvard study linking the popular British children’s show “Peppa Pig” to autism has gone viral, but neither the study nor the scientist who allegedly published it exists.

Prescription doses of folinic acid may help children with autism better develop verbal communication skills, a new study suggests.
The study was led by researcher Richard Frye of the Arkansas Children's Research Institute. In the experiment, 48 children with autism spectrum disorder and language impairment were randomized to receive 12 weeks of either high-dose folinic acid treatment or a placebo.
Children in the experimental group were found to demonstrate notably improved verbal communication skills. The findings were published in Springer Nature's journal Molecular Psychiatry.
"Improvement in verbal communication was significantly greater in participants receiving folinic acid as compared with those receiving the placebo," Frye explained in a press release.
Read more here.

The analysis revealed that in neighborhoods where white children make up the highest proportion of the autism cases, the children’s condition tends to be reflected in both types of records. The same is true for areas in which the mothers of children with autism typically have college degrees.
For every 10 percent rise in the proportion of children with autism who are white or have mothers with at least a bachelor’s degree, there was a 6 percent increase in the odds that the children who lived in that area had both school and medical records that reflected their condition.
The researchers also used data from the 2000 U.S. Census to analyze the overall demographics of each tract. They found that the more Hispanic residents and the fewer residents with a college degree in an area, the less likely children with autism were to have both types of diagnostic records. This finding held up even after the researchers controlled for a number of potentially confounding factors, such as income.
Read more here.
Posted by ddoty@mt.gov at 1:26 PM

As many as 700,000 adults in the U.S. with a disability like autism live with parents or another family member who’s at least 60 years old. What happens when those caregivers are gone? One sibling confronts her past and likely future.

Ellie was seven when she asked for a rat. We were strapped into our bucket seats in the minivan as our mother ferried us somewhere that is now lost to history. “Not while I’m alive,” my mom said over her shoulder, cranking the wheel as she turned down another street.
My sister sat quietly for a few seconds, absorbing the rebuff. Then she turned to me and smiled, two buckteeth pushing over her bottom lip.
“Ciara,” she said. “When mom dies, we get a rat.”
Eight years ago, after Ellie—not her real name—turned 18, becoming an adult in the eyes of the law, a piece of paper was filed at a King County Courthouse formalizing a decision that was reached without much discussion, drama, or fanfare. If my mother died, one of her sisters would become Ellie’s guardian until I turned 30, at which point I would take over.
Ellie still sleeps in her childhood bedroom and our mom still drives her around Bellevue, where we grew up. She schedules Ellie’s doctor appointments and manages her money. She trims her toenails. Ellie doesn’t want a rat anymore but when our mom dies, she’ll get me.
I turned 30 this summer.
Read more here.

Hurricane Matthew Could Leave A Wake Of Autism

Using data from the National Weather Service on hurricanes and severe weather from 1980 to 1995 in Louisiana, together with records of the incidence of autism in children born in Louisiana during these periods, a team of researchers led by psychologist Dennis Kinney at Harvard Medical School found a strong association between the severity of hurricanes and the prevalence of children with autism born to women who were pregnant during these storms. Overall, the study published in 2008 found that the prevalence of autism disorder was about 5 children per 10,000 births, but the rate more than doubled in children born to women who had experienced the most severe hurricanes, jumping to 13 children with autism per 10,000 births in women who experienced the most severe storms.


See the resources here.
Posted by ddoty@mt.gov at 8:50 PM 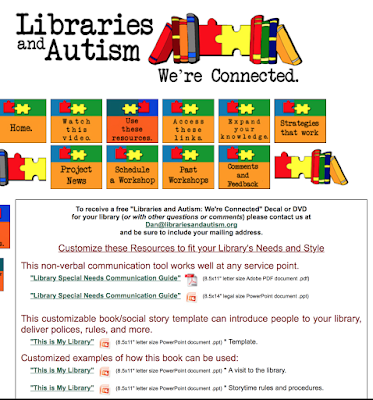 Find the resources here.
Posted by ddoty@mt.gov at 8:41 PM

Our son wouldn't stop swearing, so we taught him how to do it right

Our son Malcolm has what is generally referred to as "high-functioning autism," meaning he is verbal, can follow instructions and can consume information at a staggering rate with meticulous accuracy. It also means he has very little ability to grasp social cues or to participate ably in many social situations. He is rarely willfully disobedient and hates getting into trouble.
Except for swearing, where he swore constantly at school, to teachers and classmates.
We tried teaching Malcolm "green-light words" and "red-light words," in the hopes that he would not cuss. But we were fighting a losing battle: To an autistic preteen, it is confusing to hear "those words are wrong" when the words appear to be socially acceptable in many contexts, including the playground and the middle-school bus ride, where the rules of discourse are set by peers, not by adults. And those contexts are precisely where Malcolm struggles the most -- but also desires the most to fit in. Of all the ways to fit in, this one was pretty harmless.
So, after growing weary of constantly monitoring his language, we devised a new plan.
Read more here.
Posted by ddoty@mt.gov at 8:28 PM 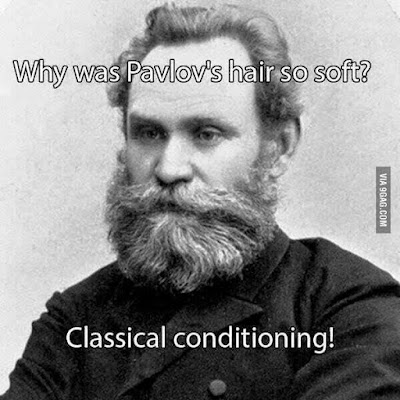 Pavlov walks into a bar. His phone rings and he says, "Oh heck, I forgot to feed the dog."
Posted by ddoty@mt.gov at 10:46 AM

Estate Planning for Parents of Children with Autism

As people grow older, especially parents, they begin to think about the future, and how their children will be provided for after they’re gone. For parents of children without developmental disabilities, this is easier, as those children can typically provide for themselves.

However, when you have a child with Autism Spectrum Disorder, the issue becomes much knottier. Not only do you have to financially provide for that child after you’re gone, you must ensure they’ll be well taken care of and that your death does not compromise the child in any way other than the obvious emotional impact losing you will have.

Below we will discuss what it means to plan your estate when you have a child with autism. We will address the basics – like what exactly estate planning is and the challenges it can bring – as well as what documents you need to have in order in your estate planning, which documents your child needs to be successful and in compliance with the law, and how you should proceed once you have put your affairs in place.

Planning for the future when you have a child with autism can be difficult, but if you take a forthright approach, you will pave the way toward a successful life for your child with autism, even if you are no longer around to take care of them.