Baby Girls With An Autistic Sibling Pay More Attention To Social Cues, Which May Protect Them From The Disorder 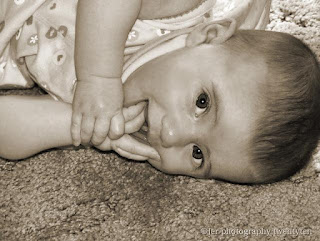 A child whose brother or sister has autism is considered "at risk," because they are about 15 to 20 times more likely to be diagnosed with the disorder than children without the same family history. A Yale School of Medicine study finds at-risk infant girls pay more attention to faces and other social cues compared to at-risk infant boys.
These superior observational skills could protect the baby girls from developing the disorder, says Dr. Katarzyna Chawarska, lead author and director of the Early Social Cognition Laboratory at Yale.
In fact, girls are four times less likely to be diagnosed with autism than boys, and, when they are diagnosed, girls display less severe repetitive and restricted behaviors than boys with autism, though they are more likely to exhibit "co-occurring anxiety and other internalizing symptoms," the authors note. However, a key feature in almost all children with autism is "atypical" attention to social cues, such as faces.
To evaluate possible sex differences and how they may influence later development, Chawarska and her colleagues measured social attention in 101 infants between the ages of 6 and 12 months who have older siblings with autism. The team also studied 61 infants with no risk of autism. These babies were all shown a video of a woman smiling and cooing at them, while she performed other activities such as preparing a sandwich. Meanwhile, the researchers tracked where the infants focused their gazes and how long.
The results? The girls in the high-risk group paid more attention to people and their faces than all other infants, says Chawarska.
“This increased access to social experiences during a highly formative developmental period predicted fewer social impairments at 2 years of age,” she stated in a press release, adding this may not prevent autism in all cases, but it would mitigate the severity of symptoms.
Read more here.
Posted by ddoty@mt.gov at 10:55 AM